In Art, Anything is Possible: A Conversation with Yinka Shonibare
by Jan Garden Castro

Visually arresting, Yinka Shonibare’s art plays imaginatively with stereotypes about race, class, culture, gender, and sexuality in order to deconstruct these concepts and show that they are “manufactured.” His re-creations include Diary of a Victorian Dandy, a suite of large photographs based on Hogarth’s The Rake’s Progress, in which he portrays the Victorian dandy; a film with black and white ballerinas based on Swan Lake; and many three-dimensional tableaux of figures, both imagined and based on known people and paintings, such as The Swing by Fragonard. While Shonibare alludes to historical periods, artworks, events, and people, the differences between the originals and his own works are central to his message.

The tableaux usually feature headless figures dressed in exaggerated fashions. Shonibare favors the Victorian era for its aristocratic repression of high emotions behind lavish attire and manners. Yet his figures are not pure Victorians; their clothes are made of the kind of brightly colored fabric worn by working-class Africans in the ’60s and ’70s. The cloth itself is hybrid, fusing Indonesian designs, British and Dutch manufacture, and the symbols and myths of African identity; as such, it symbolizes a mixed representation of Africa. 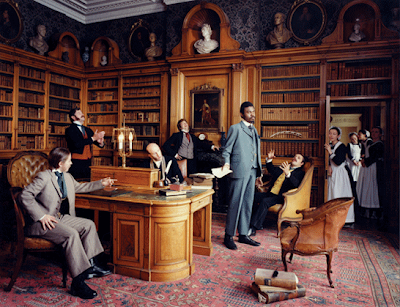 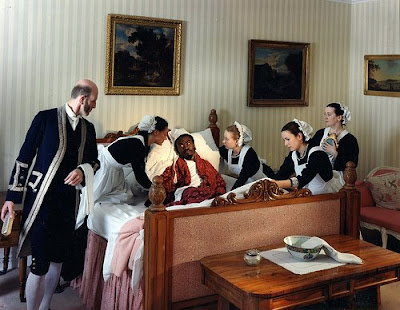