Ralph Eugene Meatyard's death in 1972, a week away from his 47th birthday, came at the height of the "photo boom," a period of growth and ferment in photography in the United States which paralleled the political and social upheavals of the 1960s and 1970s. It was a time of ambition, not reflection, a time for writing resumés, not thoughtful and inclusive histories; in the contest of reputation, dying in 1972 meant leaving the race early. It was left to friends and colleagues to complete an Aperture monograph on Meatyard and carry through with the publication of The Family Album of Lucybelle Crater (1974) which he had laid out and sequenced before his death. He was from Normal, Illinois.

While he lived Meatyard's work was shown and collected by major museums, published in important art magazines, and regarded by his peers as among the most original and disturbing imagery ever created with a camera. He exhibited with such well-known and diverse photographers as Edward Weston, Ansel Adams, Minor White, Aaron Siskind, Harry Callahan, Robert Frank, and Eikoh Hosoe. But by the late 1970s, his photographs seemed consigned to appear mainly in exhibitions of "southern" art. In the last decade, however, thanks in part to European critics (who since at least the time of De Tocqueville have forged insights into American culture), Meatyard's work has reemerged, and the depth of its genius and its contributions to photography have begun to be understood and appreciated. In a sense Meatyard suffered a fate common to artists who are very much of but also very far ahead of their time. Everything about his life and his art ran counter to the usual and expected patterns. He was an optician, happily married, a father of three, president of the Parent-Teacher Association, and coach of a boy's baseball team. He lived in Lexington, Kentucky, far from the urban centers most associated with serious art. His images had nothing to do with the gritty "street photography" of the east coast or the romantic view camera realism of the west coast. His best known images were populated with dolls and masks, with family, friends and neighbors pictured in abandoned buildings or in ordinary suburban backyards. 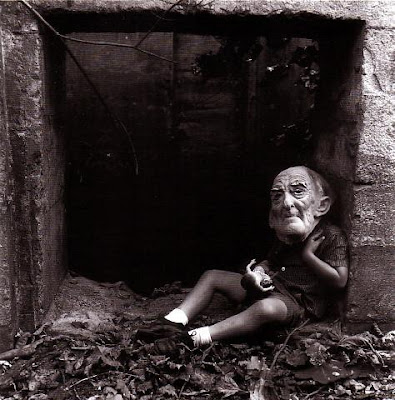 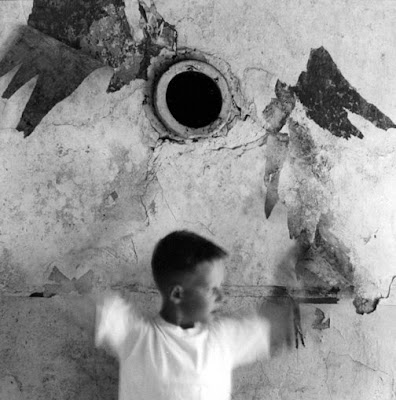 Lucybelle with her bearded brother-in-law Lucybelle Crater and fatherly friend
Posted by The Lab at 7:44 AM